I have 2 small knitting projects I finished last month. In November my MIL, Anne, said she liked a hooded cowl she saw in a catalog. She said she’d love it if I could knit it for her, or at least buy it for her for Christmas. Of course, I knew I would knit it for her. Unfortunately she couldn’t find a picture of the cowl she liked, and I wanted the cowl to be somewhat of a surprise for her, so I decided to knit the Pashmina Cowl from Last-Minute Knitted Gifts. It’s a very simple, but lovely cowl that goes with anything.

After deciding on the pattern, I had a little trouble finding the right yarn. Anne is allergic to wool, but I still wanted to use a nice, soft yarn for the cowl. I’m very lucky to have several LYS’s in the area and I looked at a couple of them before finding this Blue Sky Alpacas Worsted Cotton. 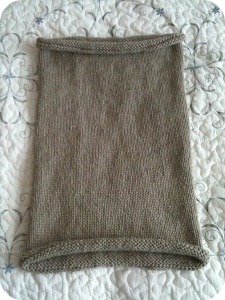 We finally got some snow and cold weather last week. Anne let me know she wore her cowl on Thursday and she loved it; she said it was wonderful and warm! That’s what I like to hear :) 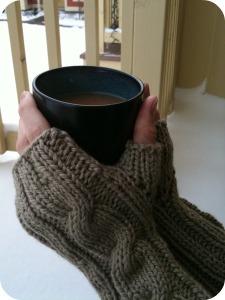 I purchased 3 skeins of the worsted cotton for the cowl, but I only used 2, so I had 1 skein left to play with. Conveniently, Blue Sky Alpacas had recently released a free pattern for these cool mitts! 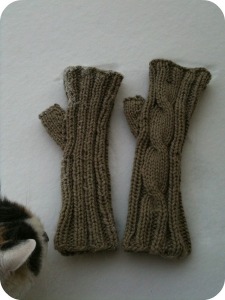 Charlie wasn’t bothered by the snow or cold. She likes to know what’s going on! 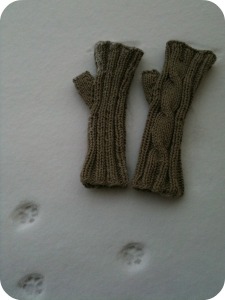 I just love her little footprints :)