Thanks for all the comments about Kennedy. She’s doing a lot better now! Sorry for the grainy iPhone pictures. Here she is relaxing in her favorite bed:

We moved the litter box upstairs so Kennedy had everything on the same level and didn’t have to use the stairs. After a week and a half, Kennedy was moving around more and not limping quite so much. Now that it’s been about 4 weeks Kennedy is going up and down the stairs when she feels like it and has even jumped on our bed a few times! Of course, I help her down from the bed because I don’t want her to jump that far to the floor!

I gave her the medicine the vet  prescribed, but I really think eliminating the stairs is what helped the most. I’m also giving her cosaquin, which is glucosamine for cats, and that should help her as well. Now we’re trying to figure where we want the litter box on our main level. It was really nice having it downstairs and out of the way!

Which brings me to my post title. World’s Best Cat Litter contacted me a couple months ago to see if I was interested in trying out their litter. Here’s Charlie checking out the package: 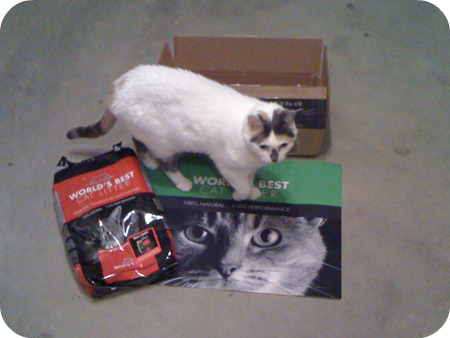 This litter is awesome! The odor control is amazing. You can’t even tell the litter box is on the main floor. It’s a great clumping litter, which means less litter is wasted every time the box is cleaned. There isn’t much of a problem with the litter tracking around the house, and because it’s made from  corn, there’s no icky dust either.  Best of all, it’s safe for us and the cats, and it’s environmentally friendly as well! But don’t just take my word for it…check it out for yourself!

Tomorrow I’ll share the Pay it Forward gift I got from Cheryl (if I can get some good pictures tonight). I’ll leave you with a little picture of me and my family relaxing on the couch this weekend :) 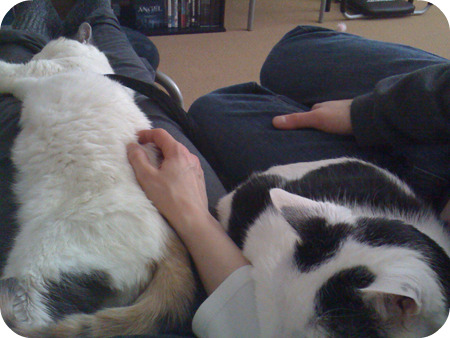